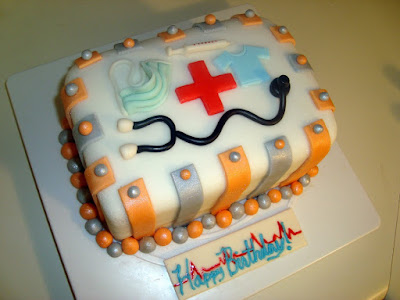 Perhaps the smallest cake I have ever done to date, a 4x6, this one was really special. It was also, technically, lol, my first carved cake aka one that was cut to form a shape other than the pan it was baked in. It was deceptively difficult, because being so small, the cake's height was almost exceeding it's width.

Down to the nitty gritty, this one was a new scratch recipe for me, again being after the holy grail of cake recipes. Toba Garrett was my inspiration for every INGREDIENT element (not style, this is obviously mediocre in comparison hehe)
from the fondant to the butter cake itself, compliments of the book "The Well Decorated Cake". I am studying her and another hero of mine, Rose Levy Beranbaum, like tomorrow isn't coming! Anyhow, it was carved into thinner tortes than I usually do just for effect, I figured being smaller it could use some extra flair lol. It was filled with a ganache, and accented with fondant as usual.

The colors were inspired by the recipient, whom had just graduated from a medical program to become an anesthetist. The colors represent his University =) Happy Birthday to you! I hope it was well received....it was so fun to make!