I can't believe my baby is four years old! Where on Earth did the time go? Every parent hears the phrase "Don't blink" about oh, a million times, within the first month of their child's life, and rarely do we understand try as we might the implications. May I just say "wow" :) Skyebird asked me for an Arnie the Doughnut cake this year, based off of one of his favorite children's books by the same title, so imagine my excitement at the thought of creating this little guy let alone theme an entire party after it! 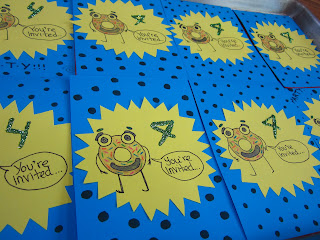 As part of the party, we watched the short story on DVD, made mini "Arnies" using chocolate frosted Dunkin Donuts with fondant eyes and smiles I had made and dried in advance for the craft. I was so busy playing hostess I didn't get good photos of any of the party setup, decor, craft etc. Lesson learned! Wow! Can someone say "hire a photographer?" Anyways, I twisted Dunkin Donuts arm to give me tons of small donut bags and napkins so that everyone could make their own "Arnie Homes" lol after they were done making him, that is, if he survived that long! Many didn't. May we take a moment for the fallen Arnies! Ok, glad we got that out of the way. Oh yeah! The cake! You probably want to see that, no? 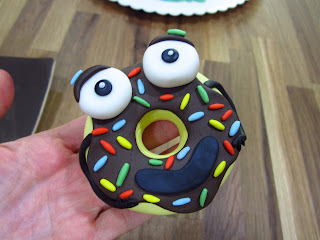 I started several days in advance and yet still, ended up staying up all night on the night before the party finishing this bad boy. As always, I used a recipe from my idol Rose Levy Beranbaum's The Cake Bible. I decided to try something new for this cake, rather than the usual white yellow or chocolate cake base, so this time, I present to you, a four layer white chocolate cake by the name of Rose's "Golden Luxury Butter Cake" in The Cake Bible, page 48! 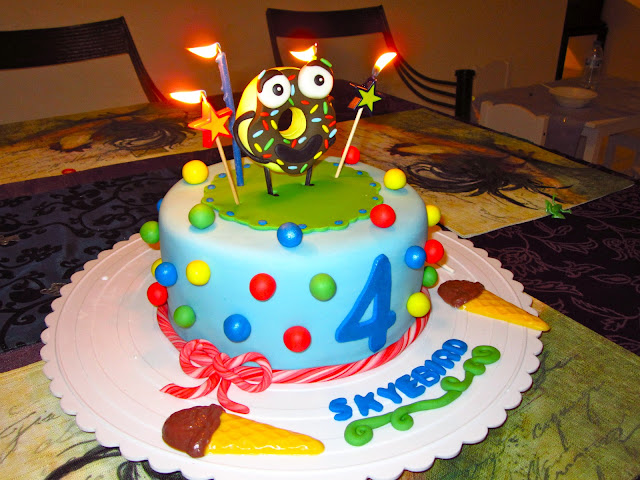 Also, I finally gave Rose's fancy buttercream recipe a chance for the filling hehe, after much encouragement from her other followers, and it did not disappoint! It is a unique way of making buttercream, containing no confectioner's sugar but rather, it starts as a mixture of sugar, freshly squeezed lemon juice and water which is then cooked to soft ball stage and immediately whipped into egg yolks until completely cooled, then whipped into butter and more lemony goodness. Delish! It had the strangest visual texture to me, smooth as silk and satiny, as someone who has never strayed from traditional American confectioner's frosting. The mouthfeel was reportedly light and airy, with a warm, gentle lemon flavor that does not overpower the perfume of the white chocolate in the cake batter. I insist on the traditional buttercream under my fondant however, so that was on the outside of the cake. 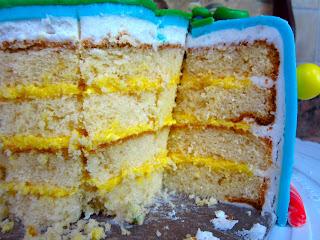 As usual, everything was made with love from scratch, and all the decorations were made from my usual fondant recipe except for the ice cream thingies, those are molded chocolates I made. We actually had a chocolate lollipop tree with more "ice cream" like you see here but on sticks obviously, but again, I got so busy I forgot to photograph it. That was a big shame, as it took hours to make! Gah! The fondant, it's just your typical MMF, you can find the recipe on Cake Central as "Rhonda's Ultimate MMF". As you can see from the picture, TOTAL CAKE DEVASTATION! Yay!

Another successful birthday behind us, great memories were made, and a good time was had by all. I have never been so happy to clean up such a big mess, quite possibly, the messiest day in this home's humble history. ROCK!

Lastly, consider this a special shout out to a local fan who will be receiving another wedge of cake VERY soon, with your name on it with love! LOL Thanks for the sweet comment :)