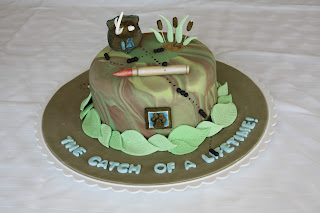 The Story: A friend contacted me about doing a special cake for her 15th wedding anniversary, specifically, as a present for her sweet Husband, also a hunter. She told me the most hilarious story from which the idea for this cake was born. Basically, his first big kill (deer) had one antler missing, reduced to a nub hehe, and when he went to put the skull cap with antlers (eww, me too!) on an ant hill to clean the brains (again, eww!) their hunting dog ran off with it, and though the dog was recovered said antlers were never found! Thus, never mounted. Poor guy! Poor dog, lol. So, this cake is a symbolic representation of that story, with a replica of the antlers in question made out of fondant and mounted on a miniature fondant wall mount hehe! How appropriate! He gets to have his antlers mounted after all ;P The frame on the front is a dog's paw print to represent the antler thief of a dog (!) hopefully you were like "Duh, I see it right there!" instead of "Oh! Is that what that was supposed to be?" lol. The ant hill is self-explanitory (I love those puffy ants!) and their ant hill/hole is reminiscent of the ones in North Carolina so I am told! Last but certainly not least, the deer bullet, or whatever the technical manly man name for it is! I bet a handful of my friends who hunt are slapping their own foreheads right now reading this! Can you tell I am not a hunter? But oh, how fun this cake was to make!
So, a breakdown. Inside this little gem is my most prized filling ever. The cake is Rose Levy Beranbaum's All-American Chocolate Butter Cake from The Cake Bible. I love her to bits still! Her recipes are worth trouble shooting for different climates, through and through and I don't regret sticking with her! Her cakes are blow-your-mind delicious, not the ordinary cake flavor one might expect (tastings are helpful I am learning!) gourmet and filled with copious amounts of science and love. Great combo, you say? My Husband is a nerd, I had to fit in somehow!
So, each layer (there are four of these bad boys) is sprinkled with my homemade amazingly smooth vanilla bean vodka (cooked off) simple syrup for maximum moisture and aroma, and then we decided to fill it with my "Daddy's SECRET German Chocolate Frosting" recipe. I used to eat the stuff out of a bowl like a meal as a kid, eek! Being a nutritarian now, that makes me cringe but understandably to my credit, it was as fabulously divine then as it is now. Due to geographic issues, I had to use fresh coconut instead of the typical American flake version called for in the recipe, but to my surprise and relief, it turned out wonderful.  I added a healthy dose of finely chopped freshly toasted pecans for good measure! Lastly, I decided no buttercream. I crumb coated and iced this cake in a thick luscious layer of pure milk chocolate ganache aka truffle filling! It was amazing to look at, and decadent as could be. After that it was covered in Rose Levy Beranbaum's recipes for Rolled Fondant and Pastillage. Most was hand painted, and glued together using chocolate and love.
Thanks so much to my friend who ordered this from me,  trusting me with such a special occasion! They were celebrating 15 years of marriage, quite an accomplishment! Congrats to you both, the happy couple! I hope your anniversary was everything you hoped for and more! 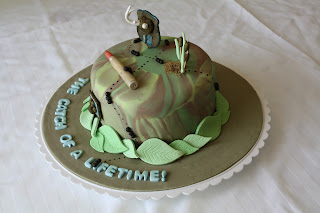